He had four short years with us… 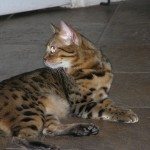 We will miss you Gir 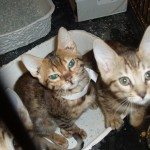 Gir and his brother Nugget, at the temporary shelter the day they were rescued from the puppy mill in 2008

We lost one of our domestic cats today. We will miss you Gir….rescued from a horrible situation at a puppy mill in 2008.

This morning Gir was unable to use his hind legs and was rushed to the vet. The diagnosis was “saddle thrombosis” – a blood clot that blocked circulation to his legs and there is no effective treatment. The kindest thing we could do was to end his suffering.

He enjoyed over four years surrounded by people who loved him – it seems so unfair that his little life should end so soon. Its especially hard when there is nothing we can do about it.

He was such a sweetie – always the crazy cat, named after a cute cartoon character with the same HUGE eyes.

Although we will all miss you Gir, you can now harass Puff some more….