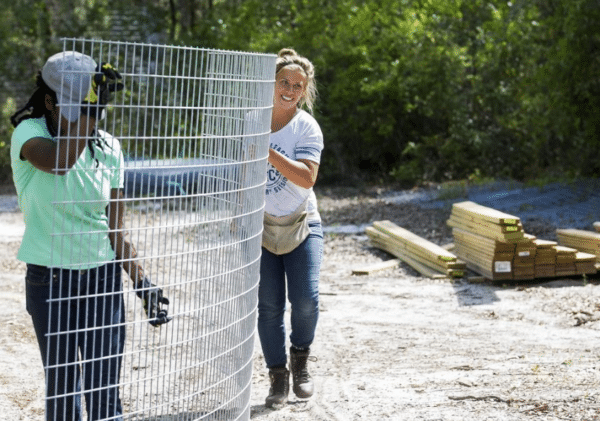 The Ocala Star Banner has done it again! Another great article! 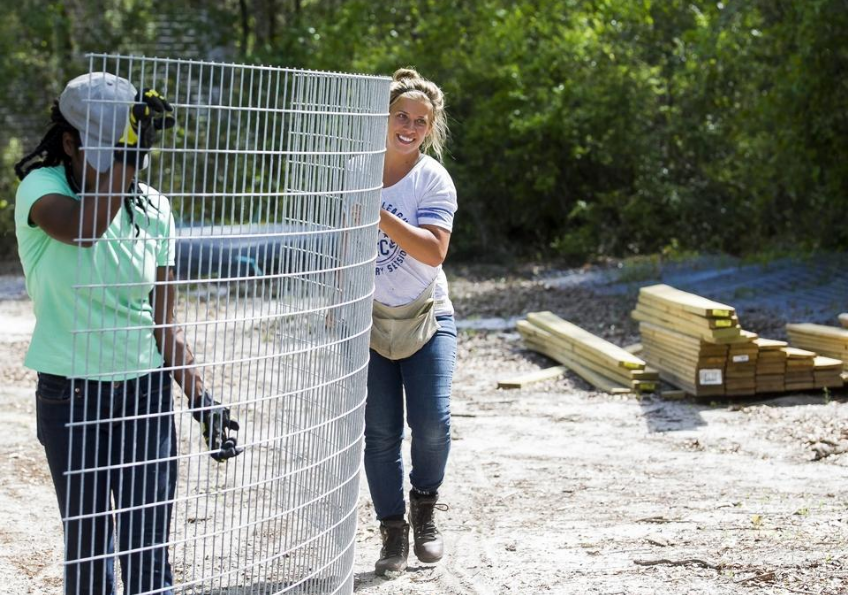 OCALA NATIONAL FOREST — Shikira Quamina’s brow glistens with a sheen of light perspiration as she holds a panel of six-gauge galvanized welded wire steady with her gloved hands. The intern from Brooklyn, New York, arrived at the Forest Animal Rescue sanctuary on March 9 and is still adjusting to the weather in Central Florida.

But she is one happy camper.

“I live in a concrete jungle,” she said of Brooklyn. Then she motioned with a wide sweep of her hand at the lush jungle in which she is standing. “It makes me so happy to be here, to walk past tigers and bears. I want to do this for the rest of life. The key is to get experience in the field and this is a great place to start.”

Operated by husband and wife Kurt and Lisa Stoner, the sanctuary is nestled on 80 acres of heavily wooded land they bought in 2010. They began moving the animals from their former sanctuary in South Florida to the sandhills east of Ocala in 2013.

As the critter population has grown, so has the need for construction of more habitat areas.

Last October, for example, the rescue was part of a nationwide operation that involved more than a dozen other such agencies; they partnered to find forever homes for more than 100 tigers and bears from a cub petting operation in Colorado that could no longer care for them.

The bears, Cody and Oatmeal, joined the rescue’s three other resident bears and all are living together in a 4-acre habitat.

The tigers — Zoey, Eva, Juanita and Natasha — are temporarily housed in enclosures that were much larger than the 10-by-10 cages in which they had been confined.

“They already think they have gone to heaven,” Lisa Stoner said.

The rescue’s resident male tigers, Tony and Roy, live in a 1-acre habitat. The goal now is to build a 1 1/4-acre habitat, after which Tony and Zoey will live in the smaller area and Roy and the other three tigresses will occupy the bigger space.

The 1 1/4-acre habitat is about one-third complete. The work would have been much further along, Stoner said, if the annual spring break tradition for universities nationwide had not taken on a new twist this year.

“We’ve had up to five weeks of students each year,” Stoner said. “This year, they all booked spring break at the same time and we could only accommodate two groups.”

Stoner said that lack of student power put the habitat construction behind schedule.

“We need a lot of locals to volunteer to help us finish this,” she said.

Working on the enclosure last week along with Quamina was intern Linelle Rivera from Puerto Rico, volunteers Sam Bale from the United Kingdom, Debbie Crane from Weirsdale and Nika Wolf, the rescue’s animal care coordinator and its only paid staffer.

With assistance from Bale, the slender Rivera wrestled a long panel of the heavy-duty wire into position as Wolf used a special tool to apply fasteners at multiple junctions. They all said the work was demanding, but worth it.

“You have to put some muscle on it,” said Rivera, beaming a wide grin.

Stoner said pretty much anyone over age 18 can volunteer to help with construction. The needs vary and training and supervision are always part of the plan. She organizes the schedule around morning and afternoon shifts of four hours each.

“We show them what to do. It’s not highly technical, but there is a certain method that requires supervision. It’s OK for most any level of fitness; you just need to be flexible,” she said.

The only other requirements are that volunteers bring a refillable water bottle and wear long pants and sturdy shoes.

Crane, who has been volunteering at the rescue for a couple of months, started with habitat construction — as do all volunteers — but recently moved up to helping prepare food and care for the animals.

Stoner said all the volunteers begin with habitat construction because that is the area of greatest need and it also gives them an opportunity to learn each person’s work ethic and personality.

“You should be an animal person, a labor person and a happy person,” Rivera said, holding onto the panel of wire as Wolf, kneeling in the sand affixing clamps, chimed in, “Yes, we like happy people.”

Wolf, who started as an intern before she became a staffer, added, “This is so rewarding. I love it. I love coming to work every single day. Most people can’t say that.”

The rescue also is home to Sulcata tortoises (third largest in the world), island flying foxes (giant fruit-eating bats with 4-foot wingspans), Egyptian bats, ring-tail and brown lemurs, wolves and a variety of monkeys. There is no breeding of any animals.

All of the habitats were carefully constructed to meet the needs of each species. Such as, for example, the concrete “cave” inside of which the Egyptian bats could be heard peeping in unison.

In creating the new 1 1/4-acre tiger habitat, Stoner has a dream of incorporating some ponds and pools for the big cats to frolic in as they would in a natural environment. She pointed to several rock boulders, some as large as a refrigerator, and said they had come from Silver Springs after the animal exhibits were removed.

“We went there to get some of the cages, but they weren’t usable,” she said, “but I saw these gorgeous boulders and said we would take those off their hands. Most women love other kinds of rocks; I love these.”

She said she is hoping a local company or two might be willing to offer some coaching or assistance in creating pools and ponds, maybe with waterfalls, for the tigers and the bears. The rescue also could use some help with tree trimming.

As for the appeal for volunteers to help finish the tiger habitat, Stoner said it applies to individuals and groups.

“We have groups do it for building morale and team-building,” she said.

One way people can learn more about the sanctuary is by taking a tour. Tours are offered twice a month and accommodate six people in a Land Rover. The cost is $50. The sanctuary is not open to the public other than through the tours.

Volunteer guidelines can be found at forestanimalrescue.org, under the “Get Involved” tab, or by calling 352-625-7377.

When asked what she would tell people who are considering volunteering, Crane replied, “There is no more rewarding experience. You just can’t do any better. It will give your life more meaning. I would encourage anyone to do it.”